Art of the far east. Płock treasures of Buddhist Asia 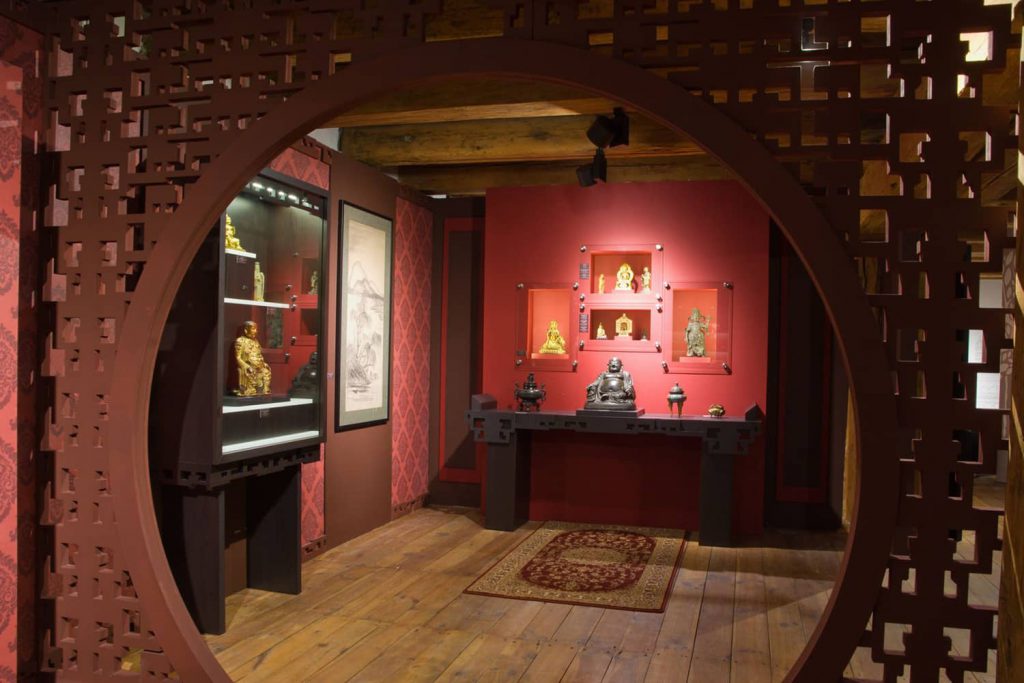 We are honoured to invite you to join a museal trip across the Far East and the mystical world of Tibetan Vajrayana. The route has been designated by the donors to our museum, whose generous gesture, already a hundred years ago and likewise in the subsequent years, enriched the society with monuments from distant lands. Rare and valuable works have been collected among the gifts, not only exotic ones, but also conducive to the image of the general artistic world of art achievements, of the highest possible value.

The donations and  purchases boast monuments originating from the part of Asia, where the culture was primarily influenced by buddhism, specifically Mahayana Buddhism (the northern buddhism of the Big Dipper). Despite obvious similarities pertaining to the religious iconography, the exhibition presents two culturally diverse worlds: the circle of Tibetan culture represented by artefacts from Tibet and Mongolia, as well as the community of ancient Chinese civilization, which apart from China itself, has been part of Japan and Korea herewith displayed.
There is yet another country whose culture, philosophy, artistic tradition and mythology has permanently interwoven into the cultural fabric of the currently displayed lands. It was India that then became the centre from which cultural content emanated and thanks to which the assimilated concepts determined the vision of the world belonging to the peoples inhabiting it. It has as such found its reflection in the central symbol of the tree under which the Buddha attained enlightenment, which in the subsequent millennia influenced the Asian culture. Until today, the descendant of that tree has been growing in the town of Bodhgaya at the foot of Mahabodhi temple built in the memory of the Buddha’s enlightenment. Therefore, the graphic representation of the structure of the edifice complements the central space of the present exhibition.
An alternative to exploring various parts of the exhibition is offered through an opportunity to follow the path of the symbols. Their descriptions as well as indications of  their locations are displayed on the multimedia screen. This allows to trace many different forms diversified both geographically and in relation to the involved input and techniques.

About the collection
The history of Asian collection of The Mazovian Museum in Płock dates back to 1913. At that time a social activist and patriot, a participant of the January Uprising, a landowner Louis Kunkiel bequeathed to the Płock museum a considerable fortune containing a collection of monuments, composed of works of art from the Far East. However, prior to the implementation of the will in 1929, the museum became endowed in precious gifts containing a sacred Buddhist sculpture and decorative arts of China and Japan. This took place in the early 20th century and the generous donor was a man with an unusual biography – Wieńczysław Wacław Piotrowski: an explorer of South America and Asia, an adventurer, a patriotic activist in exile, a participant of the First World War and the revolution of 1905, as well as a writer. Many of the monuments are individual gifts from the collectors in Płock or people who by fate of the war (the Russian-Japanese War 1904-1905) ended up in the Far East.In the first years after World War II the oriental collections of Płock museum were enriched with high-end works of Japanese art. It was possible owing to the will of Zdzisław Okęcki, a dedicated diplomat serving in the Second Republic of Poland. In 1928-1930, he served as extraordinary envoy and plenipotentiary minister in Tokyo. The remaining part of the collection belonging to this diplomat-collector was sent to the National Museum in Warsaw.
In later years the museum acquired several individual Far East monuments. In 2014, Mazovian Museum in Płock in Poland organized the first exhibition of Korean temple taenghwa paintings. In 2015, three of these were purchased, and another three transferred as a gift by the Kwan Um School of Zen. Thanks to it, we are able to present you with Europe’s only permanent exhibition of paintings.The core of the collection evolves from a corpus gathered contrary to the course of acquiring monuments according to a regular agenda that would illustrate the main trends of Asian art. Apparently, that would have resulted in the presence of works representative of the main trends in the art of the cultural circle; however, you will not find here a number of emblematic works, as Tibetan tanks or Japanese calligraphy. Instead, the presented collection is to some extent a reflection of collectors’ trends, especially those from the late nineteenth and early twentieth century, when the art of Far East fascinated not only collectors, but also inspired leading artists of the Western world, including those of Young Poland. We will find examples of such inspiration when exploring the Art Nouveau exhibition in our museum. Chinese and Japanese ceramics are predominantly export products created in view of the tastes of Europeans. They were made, nevertheless, by traditional techniques, while their ornamentation and symbols prove thoroughly of Far East style.

The collection, in effect of having been gathered for about a hundred years, allows us to become familiar with many aspects of cultures that the exhibition deals with. It  highlights not only aesthetics or art technology, but also touches upon mythology, philosophy and symbolism. Still prior to the Second World War, the then curator of the Płock museum Kazimierz Gelinek developed an educational program based on Asian collections covering the knowledge of the cultures of China and Japan.
The presented collections include many valuable monuments demonstrating the authentic evidence of the epoch in addition to the places in which they were produced. We do not lack really valuable and rare monuments which definitely stand out against Polish collections. They are, among others, Chinese statues from the Ming and Qing epochs, a medieval Tibetan sculpture of bodhisattva, and paintings from the circle of the Japanese Vajrayana. The collection of Japanese woodcuts includes the works of Katsushiki Hokusai and Utagawa Hiroshige – artists belonging to the most outstanding representatives of the world of art. Among the presented woodcuts, special attention is well-deserved by the famous Great Wave in Kanagawa – an icon of Japanese art.

Where? Kazimierza Wielkiego Street 11b, Płock

For how much? Normal ticket PLN 5, reduced PLN 3