The Museum of Mazovian Jews is housed in a former synagogue which is often referred to as Płock’s minor synagogue. This is so because the city also had its great synagogue – from 1866 untli the turn of 1950 and 1951, when it was demolished – located opposite the present-day monument to thirteen Poles executed by the Nazis during the Second World War.

The construction of the minor, two-storey, brick synagogue in Kwiatka Street (formerly Szeroka Street) was started in 1822 and finished in the mid-1850s. It ran into serious difficulties from the very beginning; the building was partially situated on Płock’s former moat, which resulted in some complications; there were insufficient funds to complete the construction; and the Bishop of Płock opposed it, claiming that the synagogue would be located too close to the cathedral. However, he soon changed his mind. Built in the neoclassical style, the synagogue was frequently renovated, e.g. after the collapse of some parts of the roof in 1863.

There were three purposes for which the synagogue was intended; it functioned as a Jewish house of prayer, a school and the seat of Płock’s Jewish community authorities. When the Germans invaded Płock in September 1939, the synagogue became the premises of a Judenrat, i.e. one of the administrative and enforcement bodies established by the Nazi invaders to manage Jewish communities in German-occupied areas. This period in the history of the synagogue was ended on 1 March 1941 by the final liquidation of the Płock ghetto with over 8000 Jewish people residing in it. This was also the end of the world of Płock Jews, which had existed since the beginning of the 13th century.

Located at 7 Kwiatka Street, the building itself survived the war, and the Jewish Committee became its owner in 1945. It was the committee’s initiative to organise the first post-war meeting of Płock Jews in the former synagogue; the meeting was attended by twenty-two people. In 1949, the Gerszon Dua-Bogen Tailor, Knitting & Hosiery Cooperative was formed in the building. In 1960, the State Treasury became the owner of the building, which was entered in the Register of Historic Monuments two years later. The former synagogue ceased to be used in 1992.

At the turn of the 20th and 21st centuries, the building had several owners. The governor of the Province of Płock made it over the local government of Płock. In 1997, the building became the Jewish community’s property again. They sold it back to the Municipality of Płock a year later. When the city council put the building up for sale in 2004. In 2006, the former synagogue was made over the association for the period of ten years. A decision giving green light for this project was taken in 2007, which made it possible to begin the extensive renovation of the building. Since 15 March 2013, visitors have been able to go to the Museum of Mazovian Jews – which is a part of the Mazovian Museum in Płock – thanks to the Płock Synagogue Association, who collected 1.3 million zlotys for this purposes; an EU subsidy amounting 7.7 milion zlotys; and an agreement on joint financing concluded by the Office of the Marshal of the Mazovian Province and Płock’s municipal authorities.

An educational and cultural institution, the Museum of Mazovian Jews is dedicated to the history of Jewish settlement in Poland. The exhibition space is divided into the following three parts: vestibule, Holocaust room and main exhibition hall. The vestibule is where the history of Mazovian Jews is presented by means of statistical documents and the most important information about Jewish settlement in Poland from its very beginning up to the recent revival of Jewish culture in Poland.

Equipped with multimedia tools, the main exhibition hall is where the visitors can become familiar with Jewish culture through samples of Jewish cuisine, music, religious holidays, customs and architecture. The exhibition room devoted to the Holocaust is based on a book entitled Kartki z pożogi (Leaves From the Flame) by Symcha Guterman, who was an eyewitness of the destruction of the world of Płock Jews, and archive photographs taken by Mazovian Jews. The exhibition is complemented with a multimedia presentation based on Jewish paper-cuts.

Apart from housing exhibitions, the Museum of Mazovian Jews organises concerts, literary soirees, lectures, theatrical performances, temporary exhibitions, lessons, film shows, slide shows, Jewish cuisine tastings, visual art workshops and dance workshops. By doing so, the museum aims at presenting Jewish culture, securing communication between Poles and Jews, fighting prejudice and challenging stereotypes. Also, it is one of the institutions which promote the region of Mazovia, including Płock itself, trough attracting tourists from both home and abroad.

For how much? Admission to the exhibition is free. 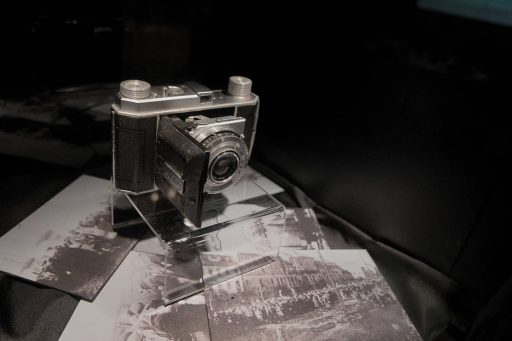 The Museum of Mazovian Jews is housed in a former synagogue which is often referred to as Płock’s minor synagogue. This is so because the city also had its great synagogue – from 1866 untli the turn of 1950 and 1951, when it was demolished – located opposite the present-day…
See the exhibition